By GrilledSteezeSandwich
January 24 in Other Mountains 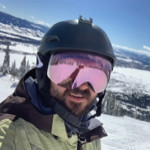 Both flights were delayed about a half hour but both my bags and I made it on time. I planned on taking Uber to the hotel but from when I landed until I got my bag, it went from $35 to $85 for the tri

Today was #1 or #1a on the list of deepest powder I’ve skied.  Over the head a few times and all in the grill on most turns.  Amazing.